Shredding the Past (Tidying 3)

The paper part very nearly took me down. Going through nine years of forgotten papers, nine years of a life in a rather stuck place…I spent over a week in paper purgatory, ignoring emails and life, swallowed whole by my not yet tidy house.

“Let it go, let it go,” I sang over the shredder, watching the statements from a traumatic and unexpected surgery disappear.

“Let it go,” as all documentation from my car accident, all correspondence with lawyers who took more than their share, the doctor’s statements of the chronic pain, a war fought, but not won.

The helplessness, the feeling of being overwhelmed, knowing that I was the only champion of my cause and I was already exhausted from pain, from the effort.

A bill from nine years ago, forgotten, the guilt. Articles on diet and exercise, neglected.  Let.

Pay stubs from a job I hated. It.

The resume for the career I never followed, never wanted, the student loan bills piled up, the different versions of myself I had tried on, cast off, forgotten, piled up around me, clamoring for my attention. Go.

The kind well wishes in cards when my dad passed away suddenly, eight years ago. Instead of feeling the kindness and love intended, I’m drowned anew by the unexpected grief, the shock.

The weight lifted just over a week later, after the last old credit card was in pieces, the last memory dealt with and released, the last lingering of guilt for the past shredded away, goodbye. 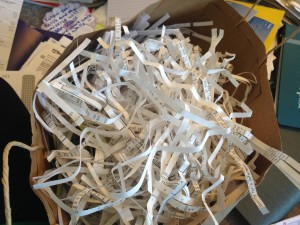 It’s not just about the massive waste of paper taking up space in my life, overfilling drawers in my small two-bedroom condo, where space is so needed.  It was the heaviness of those battles fought, but not won, the hard lessons, choices and mistakes, sitting in indecision, “just in case,” drawing my emotional energy in what should be my space of peace and rest.

At the doctor’s office, the nurse hands me a document summarizing the visit.

I shriek, backing away, practically throwing the horrible paper back at her.

“It’s for your records,” she protests.

Do I really need documentation of a cold? “If only you had a solid slip of paper from that one time you had a cold. Then we’d let you go,” they’d say. Aw, too bad.

The receptionist hands me a receipt for the same visit. No! I give this back, too. The receipt at the grocery store, the junk mail in through the door, the army of paper trying to march back in like a zombie movie. NOOOO!

I throw it ALL away now. Immediately. Done. With. Paper.

No matter how much you love it, do not print out this blog post. It will get filed away, forgotten for years. Unless you are taking it directly to a publisher or agent. That would be okay.