What my ADHD tornado taught me about life, myself, and love 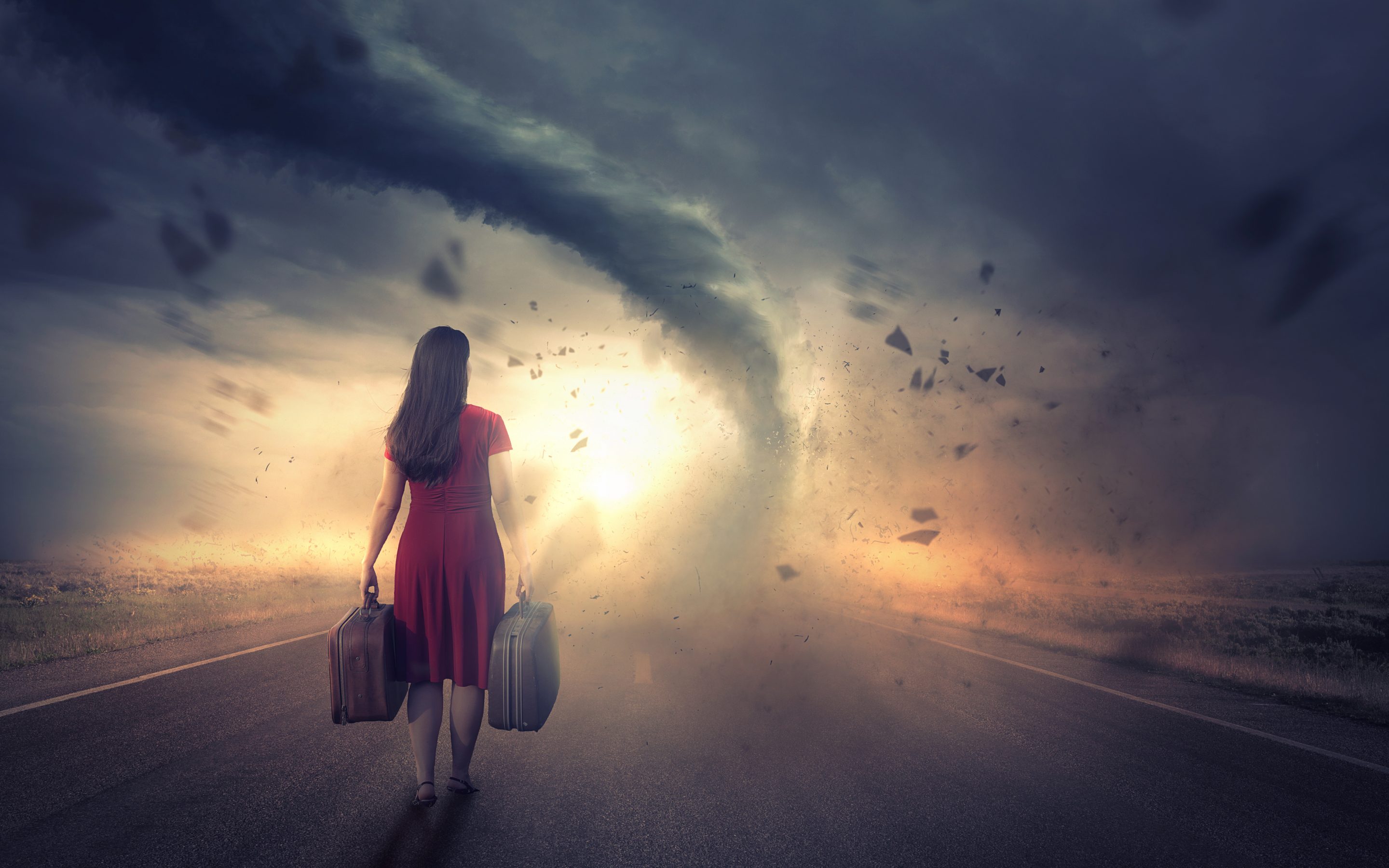 Wrenched awake by blaring sirens, the eerie green stillness glows outside as a tornado rips its way closer. My first thought as the wind whips up is, “Where is my bra?” My worst nightmare is not the leveling of the awful tiny condo, it’s being interviewed as a tornado victim on the news, braless, soaked from the rain and flopping freely for the world to see. “Didn’t she have the decency to at least grab her bra?” they would murmur, munching cheetos by the glow of the TV.

This is how it felt to be diagnosed with ADHD at age 35. I simply woke up a completely different person, the house of my identity ripped apart by the gale force of knowledge.

I want to shake many of you by the shoulders, shouting, “REALLY?! I’ve interrupted and annoyed you for this many years, confused by something shiny just past your ear, and you never noticed this? Never thought to tell me?” It only took the therapist about five minutes to notice. And two very expensive sessions to tell me.

At first I didn’t believe her, not really understanding what it was. I was never that kid running in circles, unable to sit still, blurting things out without hand raised. No, I was properly conditioned. I knew to at least hide my novels behind the textbook.

Since the hyperactive component dominated my thoughts and not my actions, I was able to slip by undetected. Procrastinating gave me the adrenaline I needed to get projects done. I had mastered the art of looking like I was deep in thought as I was actually daydreaming; unicorns, ALF, and rainbows dancing around the classroom with Punky Brewster flashing me a thumbs up. Yes, this was before they gave me medication.

Disbelief faded during the online test, incredulous as I talked back to the test in the library. “Easily overwhelmed by tasks of daily living,” check. “An internal sense of anxiety or nervousness,” oh! That’s what that is. “A prisoner of the moment,” “frequent, impulsive job changes, traffic violations,” “piles of stuff,” “chronically late,” check, check, check, ohhhhh shit.

Perhaps this was why my college boyfriend had once called me “a halfway effective person.” For years, I wondered why everyone else seemed to do things, while I preferred to think about doing things. I would spend hours planning, then the phone would ring and I would forget why I walked into that room in the first place. (This is great exercise, however, if you have stairs. Several very purposeful, daily trips are journeyed up and down the stairs for the same damn forgotten, remembered, forgotten thought.)

Kids with any kind of learning challenge nowadays have an advocate. Should that person be sick, there’s an advocate for the advocate. At the IEP meeting, you get the principal, the advocate, the counselor, the specialist, the teacher, the lunch lady, the parents, the advocate’s advocate, the Dalai Lama, and Spiderman, all sitting around the table to discuss the best learning plan for your child, how to let his creative little light shine in his special, authentic seven year old way without distracting him too much.

Note: This is GOOD.

I remembered a small plaque hanging on the pink wall in my relentlessly messy room in second grade. The pleading bunny on it said, “Lord, please help me to be the best I can be.” Later, my mom explained her hopes that the fluffy bunny would prompt me to “try harder.”

With this in mind, I called her to ask if the teachers had noticed anything when I was a kid.

“No, you were just lazy and irresponsible. Not living up to your potential. That’s what they told me.”

I was ten years old, a child, labeled “lazy and irresponsible.” Like, whoops, this one’s a dud, too bad. I can even remember an overheard conversation where my test scores had qualified me for the gifted program, but they decided that I would not “apply myself,” and left me out. Back then, this happened to many of us.*

Could accomplish so much more if only…

I believed the cruel, misguided words, wrapping them around myself like a cloak of explanation, reasons to quit before I ever started.

This “lazy” child even enjoyed doing homework. The trouble was finding it since it would walk its way to the wrong folder or I just couldn’t be bothered to dig through the desk wilderness. 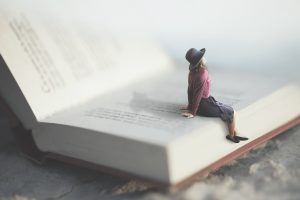 Once I had a library fine of over $100. I loved to hide in the adventures of others, but boy did those books have a tough time finding their way back once I was done. If only they could grow legs like the homework and journey to the library.

In fifth grade, the teacher dumped my desk in front of the whole class to use me as an example of how not to be. I was already the tallest child in the class, the first to sprout breasts, and hanging on to the uncomfortable puberty weight. The big girl who felt like an ogre long before Shrek made it cool. Now this? I remember the burning from my neck to my cheeks, looking at the crumpled, folderless papers, the broken pencils, the textbooks, pencil shavings and crayons, (oooh! Library book!) as the rest of the class elbowed one another, snickering. And the impact of this “lesson”? My entire house is still that same disorganized disaster…well, since the tornado… I’m the tornado.

Where was my fucking advocate? Was it the stupid bunny?

Doubled over in child’s pose, struggling to breathe, I grieved the death of the old me. I imagined what could have been over the past 35 years if only I’d been given tools to focus my energy; the scholarship to the Ivy League school, the corner office on the 30th floor, the gazillions of dollars hallmarking my wild success, the 27 books that should have been published, if only I hadn’t heard a Facebook notification when I sat down staring at the blank screen, if only I had trusted myself, if only I hadn’t internalized the mere opinions of others.

But it sure explained a lot. This is why I forgot my purse in many a restaurant back in high school, locked the keys in a running car, showed up in the right place at the wrong time or the wrong place at the right time, didn’t even always finish my own sentences or thoughts or…

Relief bathed me as I read about others with these traits, how those with ADHD actually work twice as hard as the others, but unfortunately for half the results. Suddenly, all of the most hurtful insults throughout my entire life, the ones I had accepted as a shameful part of myself, were explained away in capital letters, “ADHD.”

So, not only was this fixable, it wasn’t my fault.

You might think that learning I had a “disorder” would make me label myself further, crawling into a hole of self-deprecation and humiliation.

Instead, something surprising has happened.

I finally accepted myself, the way the yoga instructors urge in a cooing voice when I’m twisted into pain and sending them evil glares wondering when the pose will end (Breathe, let go, accept your journey and all the gloriousness of your being, ommmm).

Suddenly, my constant mistakes were just a strange brain design that could be explained, all a part of me from the beginning. Feeling so different, so apart, was actually justified. But the yogi in me wants to know why I needed a diagnosis, why I couldn’t have just accepted myself before (accept yourself right now with love, ommmm, but seriously, om shanti.)

Now, a gentle new woman is crawling up from the rubble where the tornado struck (bra and all), stepping out from the trauma with courage and a new trust in herself. This creative creature is wild-eyed with ideas, finally grasping the tools to reign them all in.**

Relaxing at the pool, I run my hand over a delightfully smooth leg, only to find that I’ve forgotten the other, leaving it neglected and screaming black stubble. Instead of cringing in mortification, I laugh it off, saying, “Oops, my ADD is showing.”

* Recently, I was surprised to learn that only about 15 percent of adults with ADD in the US have been diagnosed and treated. I met a man who told me he was sixty when he found out.

**Did I mention that one of those tools is a legal prescription for speed? As the doctor was writing the script, I properly held in my incredulousness. Once in the parking lot I giggled maniacally like I got away with something. Seriously? Speed? (As awesome as it seemed, the Aderol gave me migraines, so I discontinued using it. Surprise! Speed does not do a body good! And surprise: I’ve created my own life-long tools to adapt and I’ve simply recognized and embraced them more methodically.)

And also, I wrote this blog years ago. Finally bring it out into the light in case it can help someone else!